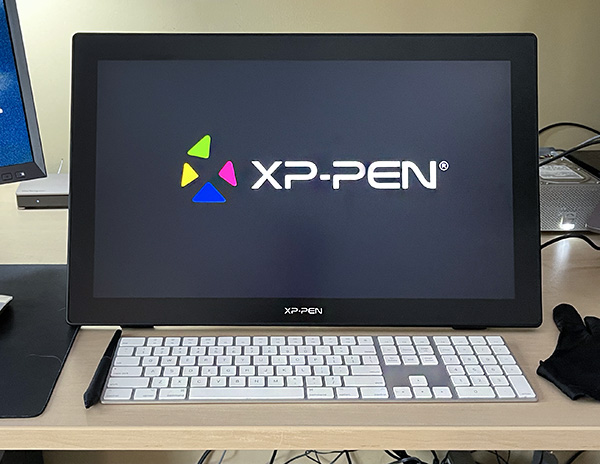 REVIEW – For eons (in computer time), Wacom has dominated the graphics and display tablet market. However, over the last few years, the competition has been heating up and this is good for the industry and especially for customers. XP-Pen is a tablet company that has been striving to become the David to Wacom’s Goliath by offering tablets at lower prices. The Artist 22 (2nd Generation) display tablet is the latest stone in their sling, so to speak.

The question is—can they beat Wacom at their own game?

The XP-Pen Artist 22 (2nd Generation) display tablet is a 21.5-inch display tablet made for digital artists and designers—both pro and amateur. It features a 1080 high-resolution screen with 90% Adobe color accuracy. It connects to a computer with a single USB-C or HDMI cord—no adapters necessary with later computers and laptops. The Artist 22 requires a computer—it is is not a stand-alone tablet (like an iPad). The XP-Pen stylus has 8,192 levels of pressure sensitivity with a 60° tilt. A built-in stand is included but can be removed to add a VESA mount.

The DECO line of affordable graphics tablets are made for beginner digital artists or students who can benefit from a small tablet with a stylus. The DECO tablets do not have a screen—the stylus works like a mouse. You must look at the computer screen. 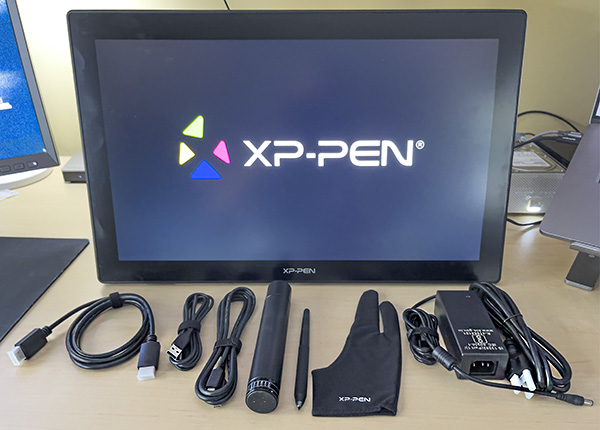 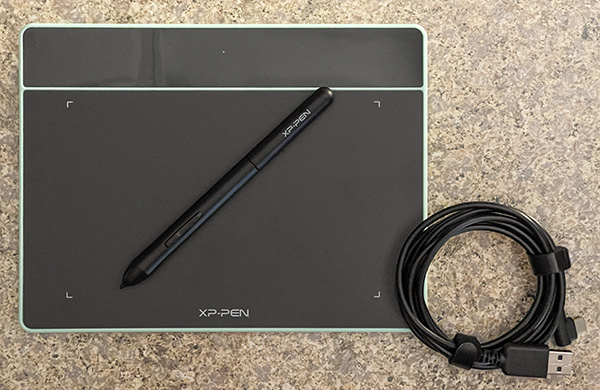 What’s in the box: Deco Fun 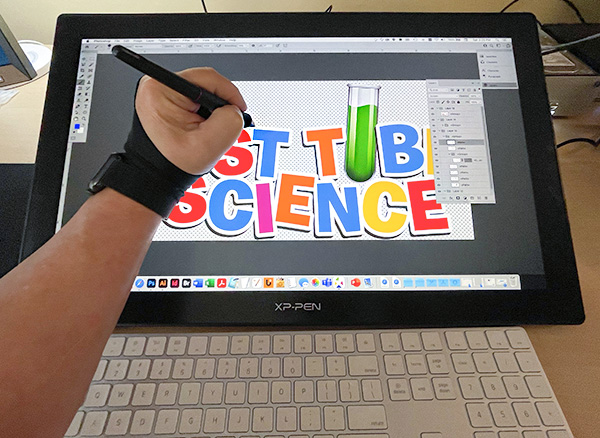 Design and features: The Artist 22

When I review a different version of a tech gadget that I’ve previously reviewed, I try to move up the ladder, so to speak. Every now and then though, I’m asked to review a “lesser” version. It’s hard not to compare this new item with its supposedly better sibling. Having said that, the XP-Pen Artist 22 (2nd Generation) display tablet holds its own against the better and more expensive XP-Pen Artist 24 Pro display tablet as well as Wacom’s much more expensive Cintiq 22.

Let’s start with the basics. The Artist 22 (2nd Generation) is a large display tablet that can double as a second monitor. It comes with a stylus (pen) that you hold. You draw directly on the tablet using the computer’s software. Even though my day job is an art director for a large children’s publisher, I am no illustrator. But I am a Photoshop expert and use a display tablet every day for my job. I’ve been using various tablets for years and am intimately aware of their pros and cons. 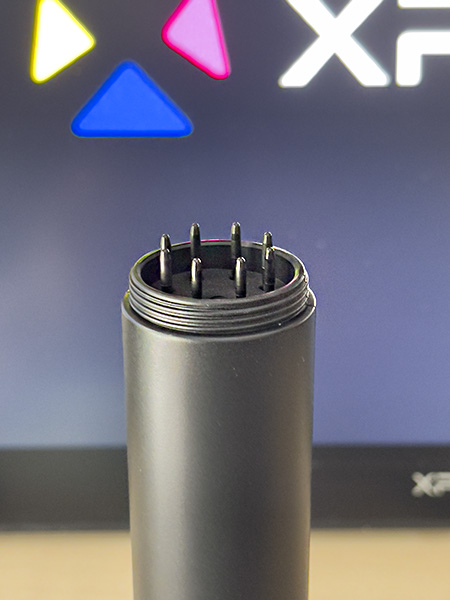 Calling the Artist 22 (2nd Generation) display tablet a stripped-down Artist 24 pro may seem like a fair statement, but there are many other factors to consider. The Artist 22 is $500. That may seem like a lot of money for a tablet, but it’s not. XP-Pen has kept the important stuff while ditching some of its “pro” features (for instance, you still get the stylus in its protective tube with a bunch of extra nibs). 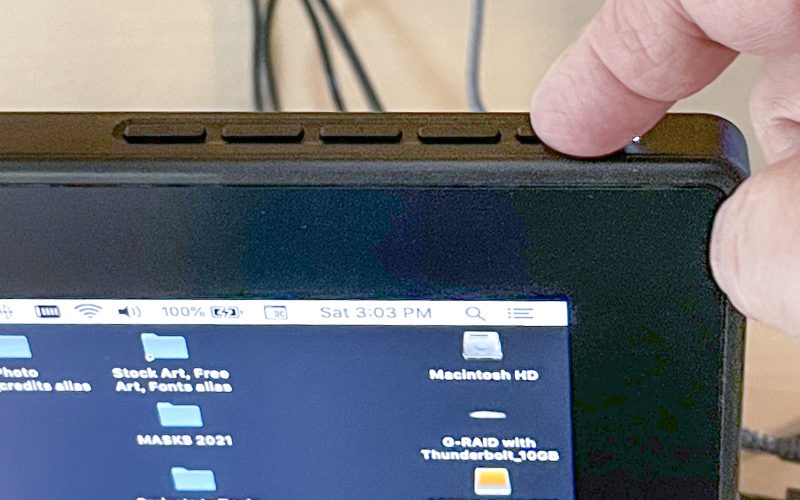 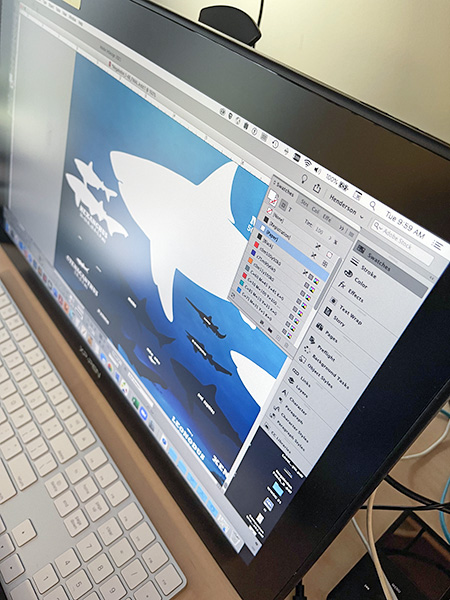 The cleaner bezel minus shortcut keys give the Artist 22 a sleeker, cleaner look. There’s still enough bezel on the tablet providing a place to rest either your left or right hand while drawing. 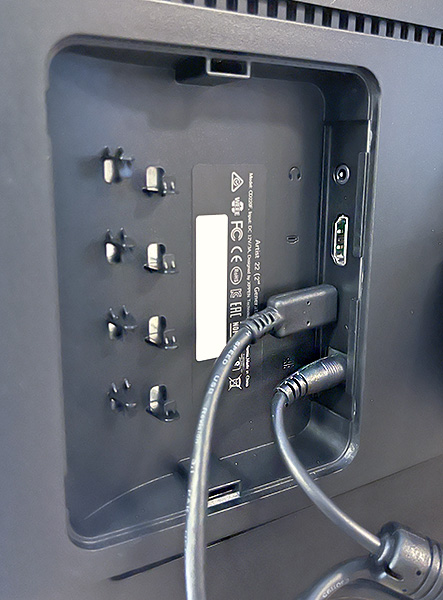 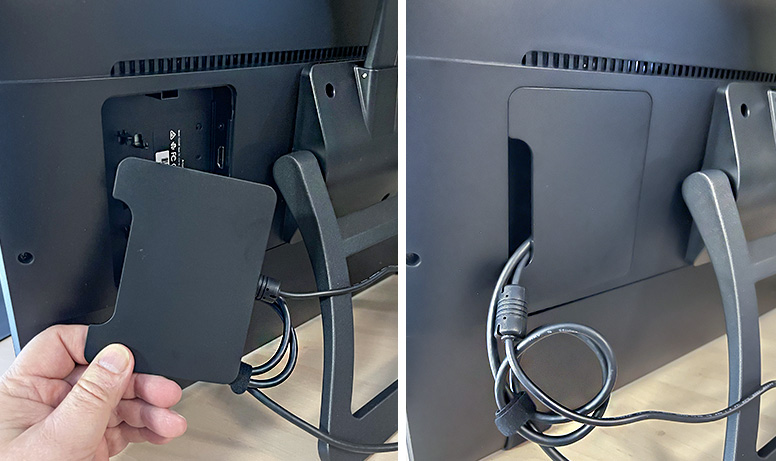 Connecting the Artist 22 is a no-brainer if you own a newer computer or laptop with a USB-C port such as my 2019 16 in. MacBook Pro with its 4 USB-C ports. You can also use an HDMI or USB A adapter connector if USB-C is not available. All the cables connect in a neat row at the back of the tablet covered by a removable plastic protective cover. There’s also a headphone port if you want audio. 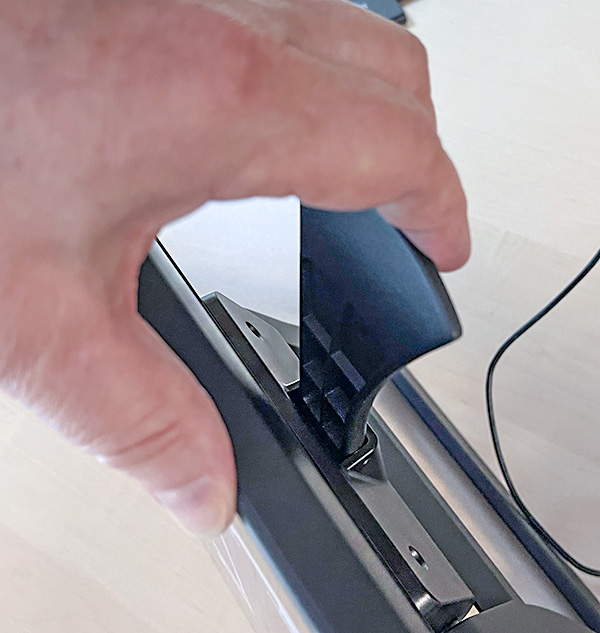 The Artist 22 comes with a removable stand that allows it to be set anywhere from 16-90° viewing and drawing angle. You don’t know how much you need a stand until you don’t have one. The stand is easy to adjust and feels rock-solid no matter the angle. It can also be removed if you prefer a VESA mount for an ergonomic arm. 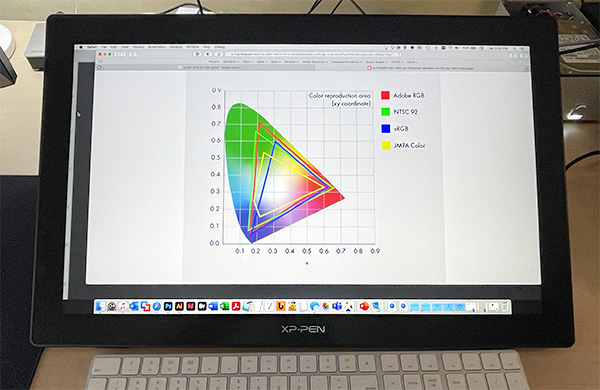 Resolution on the Artist 22 screen is 1920 x 1080p. Technically, this is called high resolution, but with 2K (XP-Pen) and 4K (Wacom) now available, 1080 is considered just average. When I boxed up the 2K XP-Pen Artist 24 Pro display tablet (2560 X 1440) to review this one, I thought I would dread the Artist 22 screen since it was a lower resolution than the Artist 24 Pro and smaller. While I did notice the difference, it was not off-putting. I continued to work on high-res photos in Photoshop without missing a beat. That was a pleasant surprise. 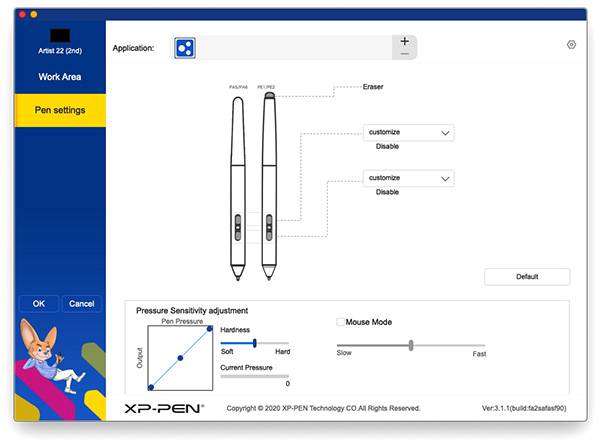 There’s a nasty little secret about display tablets and graphic tablets—and that’s software drivers. Basically, drivers tell your computer, “Hey! There’s a tablet and pen connected. Deal with it!” Drivers can make the experience of using a tablet great or awful. With XP-Pen, it was a bit of both. I have yet to get an XP-Pen tablet to work seamlessly right out of the box—and the Artist 22 is no exception.

Installing the drivers was the easy part. Then I ran into calibration issues. I couldn’t get the pen tip to line up with the screen cursor, making the tablet useless. Only after going back and forth with my employer IT Dep’t. and XP-Pen support did the issues get straightened out. I also found out that the “Pen Tablet” Mac app needs to be on at all times—something I had never been told and something I had never needed to do using any previous tablet, whether XP-Pen or Wacom. However, once I left the app on, all remains well. 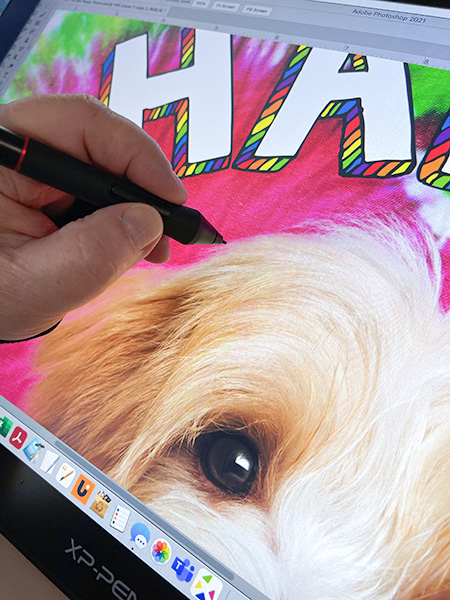 Drawing and designing on the Artist 22 is as easy and accurate as the Artist 24 Pro and as any Wacom display tablet, I’ve owned and used—once you get the drivers worked out. The pen works flawlessly and all of my Adobe apps play nice with this tablet. With my left hand holding the pen and my right hand on my keyboard, I can breeze through anything I want to do without thinking. I can just work. 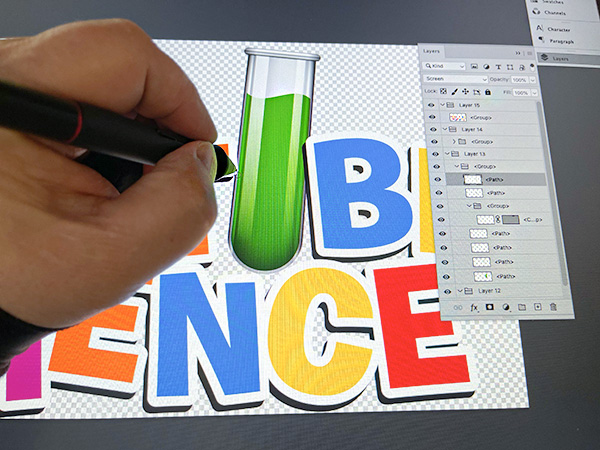 Will I keep the XP-Pen Artist 22 (2nd Generation) display tablet connected once this review is over? No, and it’s not that the Artist 22 is not a good tablet. In fact, I would call it great. Here’s the problem: It’s just not an Artist 24 Pro tablet. Despite their tacky and useless (for me) shortcut keys, the Artist 24 Pro’s screen won me over. However, if I had to choose —from scratch—either the Artist 22 or 24 Pro with my wallet, I would choose the Artist 22. It’s almost half the price and that’s a big deal. 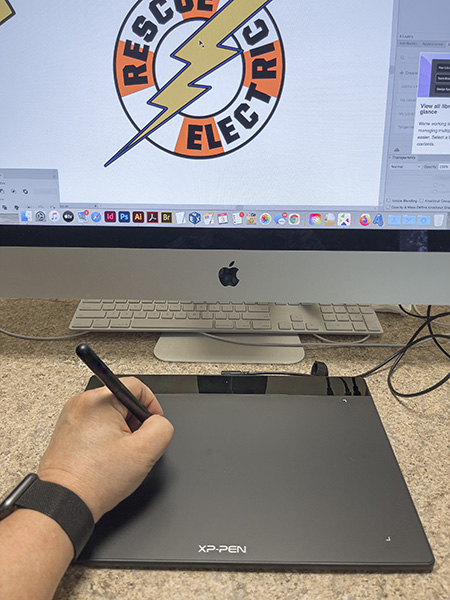 Not only does XP-Pen make reasonably priced display tablets, but they also make insanely affordable graphics tablets. They sent me three Deco Fun tablets ranging in size and price from the deco XS at $30 (4.8 x 3 in.) to the Deco S at $35 (6.3 x 4 in.) to the Deco L at $45 (10 x 6.27 in.). Now, anyone who wants to dabble in digital art or just wants to use a pen instead of a mouse can afford a graphics tablet.

Using these tablets reminded me of my Wacom Intuous days where I would look at the computer screen while my hand drew on a separate tablet. Ah, those were the days… 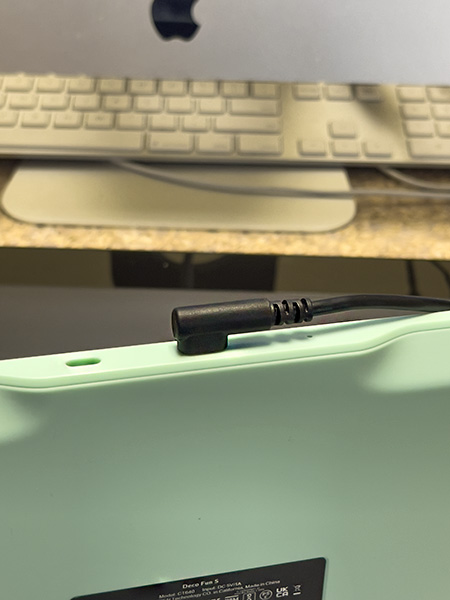 Connection is made with a USB-C to USB A cable for maximum compatibility with many computers/laptops. And the driver software installed without any hitch and the tablet worked immediately—a first! I could do anything I wanted—the tablets even support over 8,000 levels of sensitivity! Note that the Deco L and S support 60° stylus tilt. The XS does not.

The Deco line comes in four colors: Black, carmine red, apple green, and space blue. All in all, any tablet in the Deco line is a great beginner tablet for anyone old enough to use a computer. 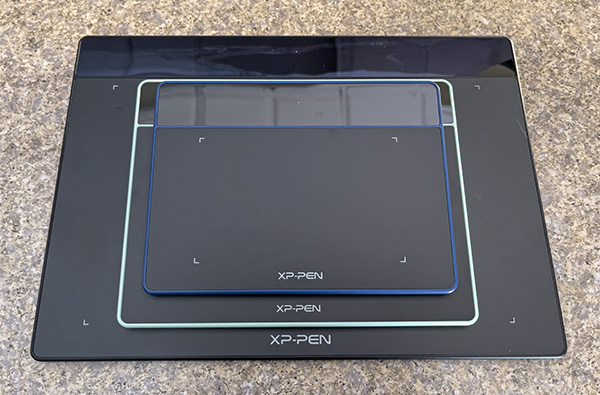 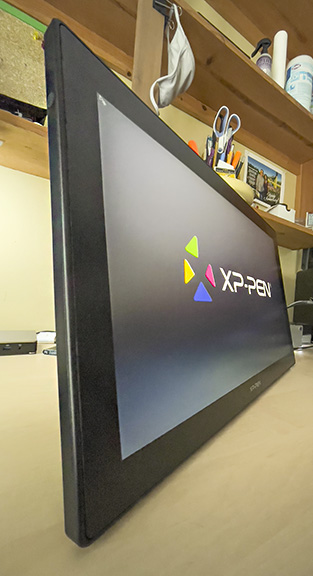 There’s a lot to like about the XP-Pen Artist 22 (2nd Generation) display tablet. It’s big, easy to work with, and affordable—for a display tablet. It would be my daily driver if I didn’t already have the better (and more expensive) Artist 24 Pro tablet. If XP-Pen can get their drivers to work as seamlessly as Wacom drivers, there would be no reason to hesitate to recommend the Artist 22.

The Deco Fun range of graphics tablets is appropriately named. Fun colors, pro-level pen characteristics, easy to set up, and use at impulsive pricing. What’s not to like?

Support The Gadgeteer: We may earn a small affiliate commission from purchases made from buying through links on our site. As an Amazon Associate I earn from qualifying purchases. Learn more.
Tags: Art artist budget creation Deco digital Display Fun graphics Review Tablets XPPen